Middle managers are a much-maligned group.  They are the level that is often most at risk in times of cost reductions, downsizing and change.  Yet they are also critical in making change work – or not work – in organisations.

Dilbert’s Pointy-Haired Boss has it right – middle managers are like the glue that binds the organisation together – they are connectors up, down and sideways.  At times of change they need to facilitate the translation of vision and strategy into programs, behaviour and action that engage people in making that change happen.  Often however they are left on their own to figure out how to do this.  There is no engagement with them on their understanding of what they need to do, the shift that is required in how they spend their time and effort, and what support they need to make this happen.

In this article, I have chosen three activities that are, from my experience, at the heart of middle leader’s distinctive value add during times of change and some of the challenges they present.

Kim and Mauborgne (Blue Ocean Leadership, HBR, May 2104) highlight that different levels of leadership add different value and should have different priorities for how they spend their time and effort.  If leaders’ time is not being spent in these priority activities it will impact on staff engagement and organisational performance.  This is particularly true during times of change.

​You will note the example below characterises the “as-is” middle leader activity profile in an organisation as “control and play safe” as opposed to the targeted profile of “liberate, coach and empower”.  This is typical of the kind of shift often needed in the behaviour of middle managers to support staff engagement and effective change.
​
Middle leaders’ “as-is” activity vs their targeted “to-be” activity map 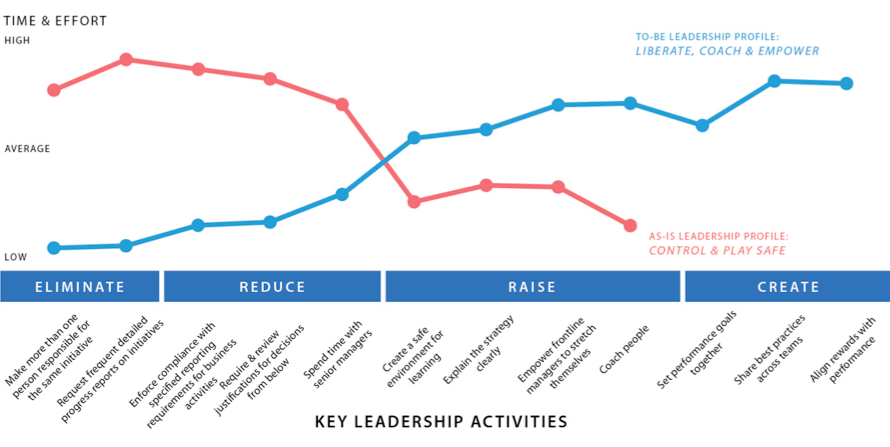 ​By mapping what leaders are doing now vs what they should be doing (based on feedback from stakeholders), then working with middle leaders to help them take action on this, staff engagement, change effectiveness, and organisational performance can be improved.

​So with this in mind, here are three key activity areas in which I have found middle leaders can add the most value during change.

1.  Listen and be courageous in providing feedback and advice upwards, even when it involves questioning the boss & the status quo

Humans are social beings who live in hierarchical groups.  We instinctively know that to challenge the alpha male or female is high risk behaviour.  There is a long social tradition of the bearer of bad news being at risk.  And we can all relate to that fairy tale where the emperor has no clothes but no one is brave enough to tell him.

Our human instincts tell us to avoid conveying the uncomfortable truth, or disagreeing with the boss.  And yet at times, particularly during major organisational change, the courage to stand up and provide contrary advice or feedback is a key requirement of an effective middle leader and is important for the effective operations of the business.

Speaking up also wins the respect of junior staff as it gives them a voice up the line on matters they feel they cannot address themselves.  This is a key role of a middle leader but it is not surprising this does not happen as often as it should.  It can be a career-limiting move to disagree and middle leaders can be caught in the between conflicting expectations – those from their staff and those from their boss.

We all know the Pointy-Haired Boss will not be telling the CEO his strategy is vague and of little interest to the engineers and needs to be reworked.  We also know we would respect him more if he did have the courage to do this and it could make a difference for the engagement of staff and the performance of the organisation.  But on the other hand, if he did that - he may be restructured out of the cartoon strip tomorrow.
Middle leaders need to be brave and run that risk and CEOs need to create a culture where it is safe to do that.

“Working the system” is not usually a topic in leadership development programs and yet it is a vital part of a middle managers role if they are to add value and empower their teams to deliver results.  It is usually a skill learnt by seeing how others do it.

Working the system for oneself is often seen, but doing this for the good of the organisation as a whole is rarer, particularly in large complex organisations where it is needed most.  It involves a combination of some shared values about what is important, an ability to stand back and see how the system works, good collaboration and people skills, creative problem-solving, understanding the dynamics of power, informal and formal networks of human influence and seeing how the business processes really work, not just how they are supposed to work.  Very often middle managers do not have these skills and need help to make this happen.

Middle managers have a key role to link across functions to break down barriers and make it easier for others to deliver results.  This is the kind of input that is critical for effective transformational change and its absence is an important reason for change failing.

3.  Translate and operationalise the vision and strategy and make it relevant for front line leaders in what they do every day

Research shows that managers, even at the top level in organisations, often do not understand the business strategy and priorities.  This is often due to numerous overcomplicated and conflicting objectives.  This becomes a particular problem for middle leaders who have a key role in operationalising the vision and strategy and bringing it to life in programs across the organisation and in the day to day lives of their staff.

Middle leaders are key carriers of the story for change.  Their role is to help break down organisational silos so change works, and to encourage contribution and collaboration and be resourceful and courageous in overcoming barriers and roadblocks.  Without this, change all too often fails.


The value middle leaders add as critical connectors, facilitators, courageous truth tellers, translators of messages about purpose, direction and targets, enablers and path clearers for implementation and delivery is critical.  Their goal should be to ensure the CEO’s strategy is not vague – it is clear and compelling for staff – including the engineers – so they are engaged and the potential of people, both in their own area and cross the organisation, is unleashed to deliver outstanding results.  This way they won’t end up as the Pointy-Haired Boss in a Dilbert cartoon.

​If you are looking for help with how to achieve this in your organisation, give me call.

Work with Susan
Susan provides consultancy advice, facilitation, coaching, change leadership and interim executive support to leaders and organisations where there is a need to challenge the status quo, engage people, shift culture and lift performance.